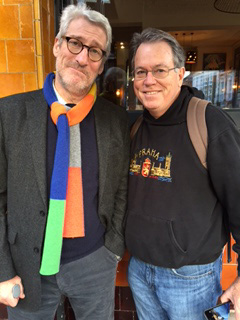 On May 13, 1997, Jeremy Paxman, for 25 years the inquisitor-in-chief at BBC2’s Newsnight, grilled Michael Howard, Britain’s then Home Secretary, about his dubious role in a political matter of considerable controversy. In that Q&A, Paxman asked Howard a yes/no Q. about the key issue. Howard, quite determined to neither admit a self-damning truth nor tell a vulnerable-to-attack lie, dodged the Q. (Sound familiar?) Word-hawk Paxman heard the dodge and re-asked the Q. Howard dodged it again. Word-hawk Paxman asked the Q. a 3rd time; Howard dodged again. Nine more times – in a row! – word-hawk Paxman asked dodgy Howard the same Q. He dodged each, but couldn’t dodge the demolition of his credibility. Winner: Word-hawk Paxman.

*a brief and serendipitous crossing-of-paths in Notting Hill

“Did you threaten to overrule him (Derrick Lewis)?”

Musante is the country’s foremost teacher of deposition cross-examination. (See Reviews.) He has taught the logic essential to taking great adverse depositions – of fact witnesses and experts – to more than 50,000 litigators in 44 states. He has made in-house presentations to the attorneys-general of 11 states and to the partners and associates of 100+ litigation law firms. (See Law Firms Taught.)

1972
Bachelor of Arts, English Literature, University of California at Davis